My project goal was to use satellite remote sensing data along with citizen science eBird observation data to study of how habitat restoration has affected various bird populations at Fernhill Wetlands, an important bird habitat near Portland Oregon.

I used Google Earth Engine (GEE) to generate and analyze multi-band LANDSAT and SENTINEL satellite imagery using GEE’s programming interface. I extracted quantitative information from the images, including indices for vegetation (NDVI and EVI), and water surface area (NDWI), among others.

Fernhill Wetlands has over 100 bird species. I expected that land-bird populations would be positively correlated with vegetation, while deep-water species would benefit from higher NDWI. Shorebird behavior would be more complex.

The NDVI, EVI, NDWI, temperature and rainfall data from 2013-2018, as well as eBird bird counts through time were combined in a multivariate analysis using R.

The analysis matched expectations for land and deep-water birds, with interesting results for shorebirds. For example, marsh songbirds showed a positive correlation with the water index, probably because the pond perimeter that they inhabit increases with water area. This data will be extremely useful for Fernhill authorities to manage the refuge.

My work shows that satellite remote sensing, in combination with eBird data, can be a powerful tool for analyzing and studying habitat impact on wildlife. I plan to use this technique to study other important wetland habitats in Southern California. This is especially important given how climate change will continue to affect the ecology of California.

Fernhill Wetlands is an important bird habitat near Portland, Oregon. In 2014-2015, it underwent a massive habitat restoration, transforming it from large unused sewage ponds into a complex native wetland habitat, complete with dry land area, open water and marsh.

The key question that needed to be answered was:

How did the habitat restoration affect the populations of various avian species at Fernhill Wetlands?

The Portland Audubon Society used bird survey data to study the avian population recovery and published their results in early 2017.

The goal of my project was to go further and expand on the Audubon study by using remote sensing and citizen science eBird data to do a detailed, quantitative study of avian fauna at Fernhill.

Specifically, I wanted to:

My hypothesis was that increasing the vegetation index would benefit land species like raptors and songbirds, while decreasing open water would adversely affect diving ducks and other deep-water species.

Additionally, the more interesting thing I wanted to find out was how shorebirds would be affected. Since they depend on both water and vegetation, I expected them to behave in more unpredictable ways depending on the relative impact of the vegetation and water indices.

The Portland Audubon Society performed an earlier study of the Fernhill Wetlands project. They used human observers to collect bird data and used it to perform an analysis through time to estimate the effect of habitat restoration on avian populations. The study was performed in 2016 and did not have some of the latest data on the further evolution of the habitat and how it continues to evolve and affect avian populations.

There has been a long history of the use of satellite imagery to study how habitats change and evolve. What is new is the advent of Google Earth Engine. This is an extremely powerful technique that makes it much easier for the end user to generate, analyze and extract remote sensing data from a variety of spacecraft.

eBird is a birder database where bird enthusiasts and citizen scientists can enter their observations for public use. Since the people doing the entries are largely knowledgable amateurs, the quality of the data is generally very high.

My goal was the use the power of Google Earth Engine to quantify the vegetation and water areas at Fernhill and use R to identify correlations with bird populations as documented in eBird. In this manner, I was building on the work done by Portland Audubon Society in conjunction with Clean Water Services. I consulted both of these organizations and the researchers who had done the earlier work, and they were very generous with their time and data and were excited to see what additional insight could be obtained through the use of remote sensing data.

My goal with this project is to establish the methodology for combining satellite remote sensing data with eBird data to perform powerful analyses of avian populations and how they are affected by habitat change. I believe this is the first time this kind of analysis is being performed.

With global warming becoming an increasingly serious threat, I believe that this kind of analysis is going to be critical to study how habitats need to be adjusted and protected to minimize pressure on avian populations. 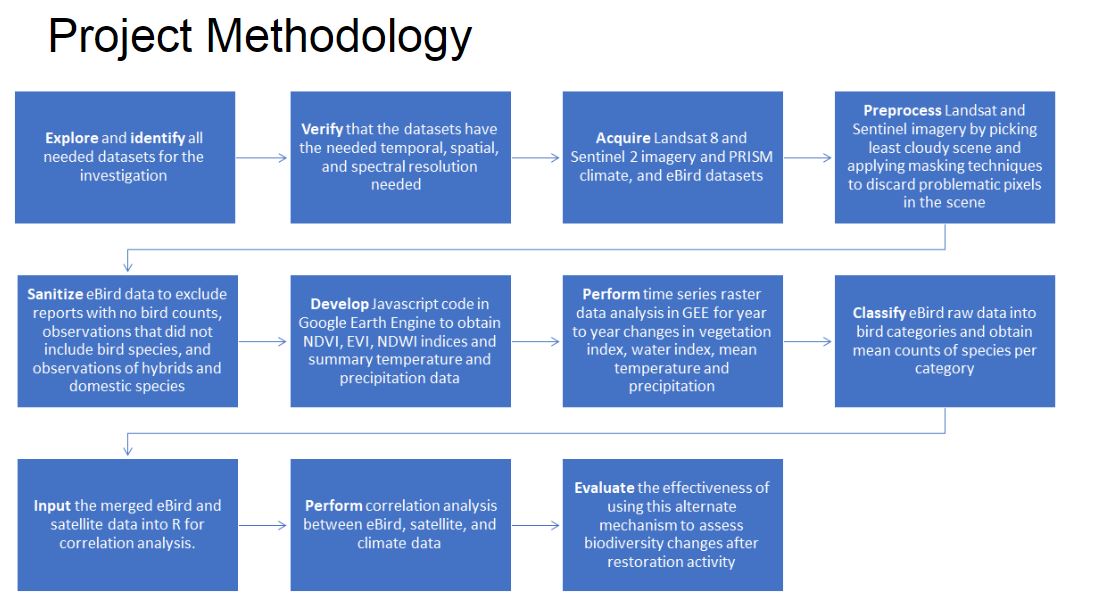 2. I verified that all the data would have the temporal and spatial resolution required to be able to do an effective analysis at Fernhill Wetlands.

3. I acquired Landsat 8 and Sentinel 2 imagery and PRISM climate, and eBird datasets. These involved the use of Google Earth Engine and special access permission to download eBird datasets.

5. I sanitized eBird data to exclude reports with no bird counts,  observations that did not include bird species, and observations of hybrids and domestic species.

8. I classifed eBird raw data into bird categories and obtained mean counts of species per category.

9 .After organizing the eBird data in this manner, I inputted the merged eBird and satellite data into R for correlation analysis.

10. I performed correlation analysis in R between eBird, satellite, and climate data. The data was obtained in correlation plots as well as tables.

11. After completing the correlation analysis, I observed the data to look for patterns in how different types of bird species reacted to the input variables. I thus evaluated the effectiveness of using this alternate mechanism to assess biodiversity changes after restoration activity.

I ensured that the experiment was fair by averaging the data collection over multiple months, multiple observers and by clustering groups of bird species into one group. For example, I clustered all the sparrows and other small passerines into one group called songbirds because their behavior and their reaction to vegetation and water indices are going to be similar, and there is more data to enable robustness against noise.

The data collection was done by myself and other eBird volunteers at Fernhill Wetlands in Forest Grove, Oregon. I performed all my data analysis at home. The only equipment I used were binoculars, spotting scope and camera, as well as a notebook to take counts of bird observations. I also used a laptop to connect to Google Earth Engine and to do the statistical analysis using R.

I am a 9th Grade high school student living in Pasadena, California. I was born in Portland, Oregon and lived there until earlier this year, when my family relocated to California.

I have been an active birder since childhood. I love being outdoors and try to go birding every weekend if possible. I am extremely interested in ornithology, ecology, conservation, and evolutionary biology, and my dream is to become a wildlife biologist and researcher after graduate school. I have been an enthusiastic participant in various citizen science projects – including Project Feederwatch for the Cornell Lab of Ornithology, annual Christmas bird counts for the Audubon Society, and as an active contributor to the eBird database.

I am also very interested in geography and computer programming and this is what prompted me to combine them with my love for birding and the environment to study the effect of habitat restoration on avian populations.

My greatest science heroes are, without a doubt, Sir Charles Darwin and the explorer Alexander von Humboldt. Among living people, I admire Sir David Attenborough, the great naturalist, as well as Drs. Peter and Rosemary Grant, the scientists who have spent decades doing amazing research on the finches of Galapagos.

Winning a prize at the Google Science Fair would be a great honor and an amazing experience for me. I am especially excited about the prizes that would allow me to travel with scientists to different parts of the world and learn about wildlife and conservation.

My project was done at home and independently. The health and safety procedures that I followed mainly had to do with transportation to the birding sites and following good ergonomic practices at home.

My parents assisted me by providing me rides to the birding sites and back in a safe manner and ensured that I did birding in safe spots.

Since most of my project was done on the computer, I ensured that I followed good ergonomic practices and did not sit at the computer for too long at a time. My parents also provided me with a good ergonomic chair that could be adjusted to the right height so that my eyes were level with the monitor screen. I worked with a mouse and keyboard setup on a desk. I took frequent breaks from the computer and stretched and walked around during the breaks.

My mom's email is rajshreesankaran@yahoo.com

I wish to express my sincere gratitude to the following people who encouraged and supported me and were very generous wtih their time, data and patience:

2. Jared Kinnear - Water Resources Project Manager, Clean Water Services, Forest Grove, OR, for giving me a lot of detailed information on how the restoration was planned and executed at Fernhill Wetlands